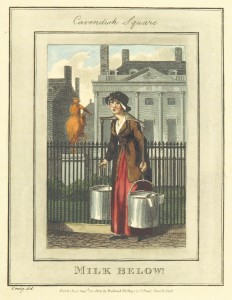 EVERY day in the year, both morning and afternoon, Milk is carried through each square, street, and alley of the metropolis, in tin pails, suspended from a yoke placed on the shoulders of the crier, as represented in the Plate.  Milk is sold at four pence per quart, or fivepence for a better sort: yet the advance of price does not ensure its purity, for it is generally mixed in a great proportion with water by the retailers before they leave the Milk-houses.  It is calculated that 8,500 cows are kept for the supply of Milk, and that 6,980,000 gallons are annually sold in London.  The adulteration of the Milk, added to the wholesale cost, leaves an average profit of cent. per cent. to the venders of this useful article.  Few retail trades are exercised with equal gain.  A retailer of Milk, in opulent parts of the town, employs two or three carriers: these are, almost universally, Welsh girls, whose uncommon strength and hardiness of constitution peculiarly fit them for an employment of such great labour and constant exposure to the inclemencies of the weather.  Milk Walks, that is, a certain proportion of neighbouring streets served by a particular person, are sometimes disposed of by advertisement, and often for a considerable premium.  Cream is sold by the Milk-carriers at one shilling and fourpence per pint.

Cavendish Square is in Marybone, on the north side of Oxford-road.  In the centre of an enclosure, erected on a lofty pedestal, and standing on a round platform, is a bronze statue, in the exact uniform of the guards (probably for the assistance of the regimental taylors), mounted on an antique horse, all very richly gilt and burnished.  The singular inscription, which takes care to inform us, to prevent mistakes, that it is an equestrian statue, is as follows: — "William Duke of Cumberland, born April 15, 1721 — died October 31, 1765.  This equestrian statue was erected by Lieutenant-general William Strode, in gratitude for his private friendship; in honour to his public virtue; —Nov. 4, Anno Domini 1770."

The possessive pronoun his is very happily introduced here, because it may be applied to either of the antecedent persons, and will no doubt create subject of learned dispute some ages hence.  This statue is seen peeping, like a piece of gilt gingerbread in a green grocer's stall, through a plantation of trees, shrubs, and flowers.  In the background of the Plate are two very elegant houses, striking for their unity of design, built by the late Mr. Tuffnell.  It was intended to have built the whole square on the same plan, but the expense occasioned the project to be dropped.  The house at the corner of Harley-street was occupied by the late Princess Amelia, and now by the Dutch Banker, Mr. Hope.